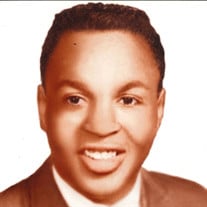 “If the Son therefore shall make you free, ye shall be free indeed.” John 8:36 On August 17, 2021, our beloved father, son and brother, Bennie Lewis, transitioned into eternity, and he will be truly missed. Bennie was born September 20, 1943 in Murphysboro, IL to the late Willie Mae Langford Lewis and Norah Lewis Sr. He was the second born son of their seven children, and all of them were boys. As a small child, Bennie vowed to achieve his life’s dream, and with that, he began his journey from rags to riches. He began bundling hay at a young age. By the time he became a teenager, he worked at a local barbeque place in Murphysboro, Carl Witts. He graduated from Murphysboro Township high School and then joined the Army. He married and started his family with his wife. He had three children, Fred, Jackie, and Paul. Bennie was employed at Caterpillar Tractor company for over 30 years before he retired. He had a passion for cars, so he opened his own business, Lewis Auto Sales. Bennie passed away peacefully in his sleep, August 17, 2021. He had to go, but he leaves his most prized possessions behind, which are his children. Paul Lewis, Fred (Jamie) Jones, Kelvin Gilmore, and Jacqueline (Mark) Bell. He also leaves his brothers, whom he loved dearly: John Lewis, Carbondale, IL; Reco (Betty) Lewis, Decatur, IL; Bobby Lewis, Decatur, IL; Randy Lewis, Toledo, Ohio. He leaves 12 grandchildren that he loved: Rodneisha, Jatafta, Lance, Trenton, Kendall, Zachary, Kellena, Jaylon, Celina, Halle, Ashlee, and Easton. He also had 4 great-grandchildren: Daylynn, Isiah, Rashad, and Hudson. Bennie was preceded in death by his parents Norah and Willie Mae Langford Lewis; his older brother Norah Lewis Jr. and brother Frankie Lewis; and grandsons Ishamel Lewis, Taft Lewis.

&#8220;If the Son therefore shall make you free, ye shall be free indeed.&#8221; John 8:36 On August 17, 2021, our beloved father, son and brother, Bennie Lewis, transitioned into eternity, and he will be truly missed. Bennie was born September... View Obituary & Service Information

The family of Bennie Lewis created this Life Tributes page to make it easy to share your memories.

“If the Son therefore shall make you free, ye shall be free indeed.”...

Send flowers to the Lewis family.