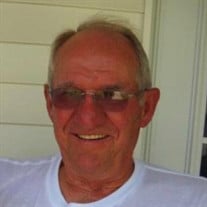 Billy Morris Wilson, 84, of Stonington, passed away peacefully at home at 11:15pm Friday, October 8th after a short battle with cancer. He was surrounded by his wife, daughters and two granddaughters. He was born September 7, 1937 in Decatur, IL to Hubert Estle Wilson and Edna Mae (Benson) Wilson-Ellis. He graduated from high school and at the age of 18 he entered into the United States Navy and served four years on the U.S.S. San Pablo even earning a good conduct medal. His service took him all across the Atlantic and Caribbean Oceans where he visited several islands and countries in Europe and Africa. These travels laid the foundation for incredible bedtime stories for his grandchildren later on. On June 18, 1977, he married the love of his life, Brenda Joyce Whitlow at the Stonington First Baptist Church in Stonington, IL. From that point on, he never left her side and served her faithfully over the years. Billy was a member of the Stonington First Baptist Church, Stonington Masonic Lodge #1066, Stonington Order of the Eastern Star, and a 47 year member of the Carpenter’s Local #742 in Decatur, IL. He liked to golf and fish and was also an avid race fan taking many of his grandchildren and great-grandchildren to races at the Indianapolis Motor Speedway. Family came first for him and he never hesitated to lend a helping hand and was known for his quiet acts of service. Billy is survived by wife, Brenda Joyce Wilson; son, Phillip (Tammy) Hamell of Mt. Auburn, IL; daughters Lori Ann Melzer of Stonington, IL and Becky Wilson-Lusk of Avon, IN; sisters, Patricia Louise Campbell of Decatur, IL and Mary (Joe) Kester of Decatur, IL; grandchildren, Bridget (Josh) Willard, Brandon (Brianne) Hamell, Catherine Rhodes (Jacob), P.J. (Cody) Talley, and David, Madelyn and Molly Lusk; 10 great grandchildren and many extended family and friends. Billy is preceded in death by his parents; siblings, Darrel Wilson, Gary Wilson, Ronald Wilson, Phyllis Andrews and Janet Ogden. Memorials can be made to Folds of Honor Indiana. Go to FOHIN.org to sign up and donate, or mail memorials to 4000 W 106th Street, ste. 125-347, Carmel, IN 46032. A visitation will be held at Stonington First Baptist Church on Wednesday October 13, 2021 from 5:00 PM to 8:00 PM. Services will be held at Stonington First Baptist Church on Thursday October 14, 2021 at 11:00 AM with burial at the Old Stonington Cemetery to follow with full military honors. The family would like to extend their gratitude to the many neighbors and friends who served them over the last several weeks. Your kindness did not go unnoticed. Condolences may be sent to Billy's family at www.gracelandfairlawn.com

Billy Morris Wilson, 84, of Stonington, passed away peacefully at home at 11:15pm Friday, October 8th after a short battle with cancer. He was surrounded by his wife, daughters and two granddaughters. He was born September 7, 1937 in Decatur,... View Obituary & Service Information

The family of Billy Morris Wilson created this Life Tributes page to make it easy to share your memories.

Send flowers to the Wilson family.