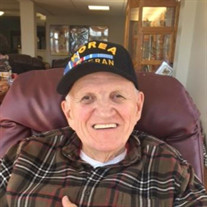 Charles “Chuck” William Gooden, formerly of Decatur, Illinois, passed away on Monday, June 7, 2021 (11 days shy of his 90th birthday). He was born in Auburn, Illinois on June 16, 1931, to Embree and Oleta (Radford) Gooden. He was raised in Virden, Illinois. After more than 55 years in Decatur, Charles lived in various nursing homes in Jefferson City, Missouri. The past few years his home was the Missouri Veterans home in Mexico, Missouri. There he was well cared for and enjoyed the staff; he thought they were his employees in his hotel! Charles married Eloise (Tutt) Gooden on September 29, 1951. He enlisted in the Army and served as a company clerk while stationed in Korea during the Korean conflict. In 1962, Charles and Eloise adopted two, five-year-old girls (Becky and Lori) from an orphanage in Kermanshah, Iran. The parents had to learn some Farsi, and the girls had to learn English! Over the years, Charles held many jobs. These included a meatpacker for Rath Packing Company, a car salesman for several dealerships, and finally, retiring after 30 years from Firestone Tire and Rubber Company “Where everyone knew his name”! He loved selling cars and then sending them to the local Firestone Store for repairs and products. Charles faith in God led him to be involved in various churches over the years-Glad Tidings Assembly of God and his last church, Mound Chapel Church of God, both in Decatur, Illinois. He loved singing in the choirs, serving on various committees and as a Deacon. You could always find him smiling, teasing, and ready for conversations. Of course, he loved all the church potlucks and outings. After retirement and the death of Eloise (2006), he became a member of the Macon County Honor Guard. He was very proud to pay respects to his fellow veterans at their funerals. During the summer you could find him watching, discussing and armchair coaching the St. Louis Cardinals baseball team. During the winter months, the Chicago Bears were his pastime. He loved to read mysteries and western fiction, working under the hood of cars, watching police shows and of course he loved to eat! In the last few years of living in Decatur, he enjoyed meeting up with a special group of friends-Bonnie, Judy, Jim and Sandy and other- for breakfast and attending various dances, bands, and events with them. Charles is survived by his daughters, Becky Gooden and Lori (Denny) Hodges, both of Jefferson City, Missouri; grandson Daniel (Stephanie) Clark of St. Louis, Missouri and granddaughter Maria Clark (Denver, Colorado); a great-granddaughter due in October 2021; sisters-in-law: Wilda, Ginny, Shirley, Reta, Patsy, and Sharon; numerous nieces, nephews, great nieces, and great nephews. He was proceeded in death by his parents; brother, Olen Gooden, Sr.; and grandson, Michael Reza Clark. Burial will be at Graceland Cemetery. Family remembrances will be conducted at a future date. Arrangements are being handled by Graceland-Fairlawn Funeral Home and Cemetery, Decatur, Illinois.

The family of Charles "Chuck" William Gooden created this Life Tributes page to make it easy to share your memories.

Send flowers to the Gooden family.