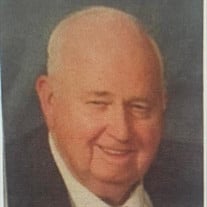 Charles Logan Nottingham, 86, of Normal, IL passed away February 10, 2022 at McLean County Nursing Home. Charles was born February 3, 1936 in Decatur, IL, the son of Edward Nelson and Elizabeth (Mayberry) Nottingham. He married M. Joann Smith on October 10, 1980 in Decatur, IL at St. John’s Lutheran Church. He was a veteran of the US Army. Following his military service, he worked for Orkin and was also a greeter for Wal-Mart. He was a member of Good Shepherd Lutheran Church. During his leisure time, he enjoyed golfing and was an avid bowler. One of his loves was singing country music. Surviving are his daughter, Penny Culp (Craig) of Normal, IL; grandchildren, Charles Smith of Springfield, IL, Brian Oros of Decatur, IL, Matthew Culp of Goose Creek SC, Kaitlin Culp of Normal, IL; great grandchildren, Linnea Biddenstadt of Fort Madison, IA. He was preceded in death by his wife, M. Joann; parents, son, Jimmy Nottingham, and brother Larry Nottingham. Funeral service will be 11:30 AM Monday, February 14, 2022 at Good Shepherd Lutheran Church. Visitation will be from 10:30 – 11:30 AM Monday at the church. Burial will be at Graceland Cemetery. Condolences may be left to Charles’s family at www.gracelandfairlawn.com.

The family of Charles Logan Nottingham created this Life Tributes page to make it easy to share your memories.

Send flowers to the Nottingham family.