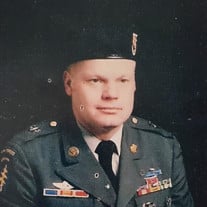 Charles Opel, 75, of Decatur, IL passed away February 1, 2022 in Lewes, DE. Charles was born January 24, 1947 in Decatur, IL, the son of William and Hulda (Johnson) Opel. He married his wife Elisabeth on July 17, 1971 in Junction City, KS. Charles was a veteran of the US ARMY. He had served three tours in Vietnam, as a special forces Green Beret. He had become a highly decorated serviceman and retired after 32 years of service, at the rank of Master Sargent. Charles was a member of the American Legion. Surviving are his wife, Elisabeth; daughter, Michelle Opel of Ellicott City, MD, step son, Thomas Kircher of Ococee, FL; brothers, Michael Barger of Lewes, DE, Scott Barger of Selbyville, DE, Carl Barger of Atlanta, IL, Kenneth Barger of Blue Mound, IL; 4 grandchildren; and (Aunt Pat) Marjorie Patricia Filchak. He was preceded in death by his parents, and brothers, James Berger and Thomas Barger. Graveside service will be conducted, 1:00 PM Thursday February 24, 2022 at Graceland Cemetery. The Graceland Fairlawn Funeral Home has been entrusted with arrangements of the service. Condolences may be left to Charles’s family at www.gracelandfairlawn.com.

The family of Charles Opel created this Life Tributes page to make it easy to share your memories.

Send flowers to the Opel family.