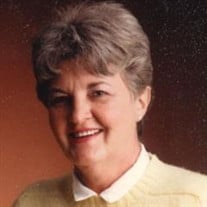 Decatur - Claudette M. Gates, 89, of Decatur, IL, passed away November 9, 2021, at Carle Foundation Hospital in Urbana, Illinois after a short illness. Claudette was born in Detroit, MI, the daughter of Claude and Theresa Peppler. The family moved to Fort Lauderdale, FL where Claudie pursued a modeling career and worked at the Fort Lauderdale courthouse. After her first marriage in 1951 to James O. Morton, Claudie’s daughter Michelle (Shelly) was born. In 1957, she married Joe I. Gates of Decatur and at the age of 26, became the mother of the four children of Joe and the late Helen Madeira Gates. With the addition of Shelly, the new family became affectionately known as “the Gates kids.” Claudie devoted much of her life to Joe, her adoring husband of 47 years, and to the loving care of the five children that completed her family. She enjoyed playing golf in her more active years and traveled widely with Joe, including two visits to Australia. In later years, Claudie’s fervent desire was to maintain her independent living in the home that she and Joe had shared. To her great credit, she was successful in fulfilling that wish. Surviving are her children Joseph Jeffrey of Chandler AZ; Joelen of Mansfield Center, CT and her daughters Jia and Selina; Shelly Ronald and her husband Peter of Warrnambool, Australia and their son Eric; Jeri Crouse and her husband Bruce of Marietta, GA and their son Brent; and Janine Nelson and her husband James of Sun City, AZ and their children Daniel, Niccole, Jillian and Jimmy; six great grandchildren, and her nephew Dr. Tom Davey and his wife Mary of Mt Zion, IL. Claudie was preceded in death by her husband Joe, her parents, sister Yvonne Moody, and her grandson Lee Ronald. The family would like to give special thanks to Minnie Hunter who provided companionship and care for Claudia for the past eight years and to the staff at Carle Foundation Hospital for their care and compassion in the final days of her life. Private graveside services will be held at Graceland Cemetery. Condolences may be left to the family at www.gracelandfairlawn.com

Decatur - Claudette M. Gates, 89, of Decatur, IL, passed away November 9, 2021, at Carle Foundation Hospital in Urbana, Illinois after a short illness. Claudette was born in Detroit, MI, the daughter of Claude and Theresa Peppler. The family... View Obituary & Service Information

The family of Claudette M. Gates created this Life Tributes page to make it easy to share your memories.

Send flowers to the Gates family.