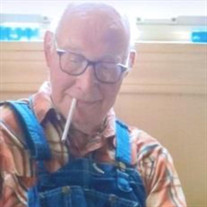 David Lee Kemp, 83, of Decatur, IL, passed away at 3:30 P.M. on Saturday (03-19-2022) at Lincolnshire Place, Decatur, IL. David was born on July 4, 1938 in Armstrong, IL, the son of Charles Kenneth Kemp and Helen (McGinnis) Kemp. He married Donna R. Hanks on October 11, 1969 in Decatur, IL. They shared 46 and a half years together. She preceded him in death on July 31, 2016. David served his country in the United States Army. He retired from PPG. David enjoyed the outdoors, doing lawncare, and spending early mornings at McDonald’s visiting and drinking coffee. He is survived by his children of the heart: Heather (Douglas) Doan of North August, SC, Todd (Jeffrey) Russell Cook of Decatur, IL, Candace (John Williams, Jr.) Hayes of Decatur, IL, Jeffrey (Bridgett) McIntyre of Oakley, IL, sister Charlotte and Larry of Waynesville, IL, 4 grandchildren of the heart, 4 great grandchildren of the heart, and nieces and nephews. David is preceded in death by his parents, wife, 2 sisters Janet Jennings and Katheryn Shumock and one nephew. A Funeral service will be held at 11:00 A.M. on Monday (03-28-2022) at the Star of Hope Mausoleum with visitation from 10:00 A.M. until service time. Entombment will be at the Star of Hope Mausoleum. Memorials may be made to: Alzheimer’s Association. Condolences may be left to the family at www.gracelandfairlawn.com

The family of David Lee Kemp created this Life Tributes page to make it easy to share your memories.

Send flowers to the Kemp family.