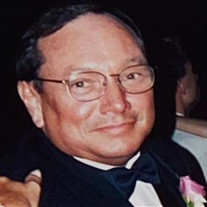 Donald D. Crisup, 74, of Decatur, Il passed away peacefully on Tuesday, March 8th, 2022. Services will be held 11:00 AM Monday, March 14, 2022 St. Patrick’s Catholic Church. Visitation will be from 10:00 AM - 11:00 AM at the church. Burial will be at Graceland Cemetery. Memorials: Michael J. Fox Foundation https://www.michaeljfox.org/donate or St. Patrick’s Catholic Church. Don was born in Pana, IL on June 23, 1947, the adopted son of Herman and Alberta Crisup. He attended St. Teresa High School, and graduated from Warrensburg-Latham High School in 1965. Don went on to serve his country in Vietnam as a Radio Operator and Sergeant in the US Army from 1966 to 1969. Upon returning, Don married Janet Smith, on July 19, 1969. Don spent his early career at Huss & Schlieper. His passion was always to be a business owner, which began in 1980 as a co-owner of Esker’s Tavern, then grew to include McMillan Electric, Topper Lanes, and The Lite Company. Before retiring, Don also spent several years as a Supervisor at the Decatur Indoor Sporting Center. He attended both Richland Community College and Millikin University in Decatur, Il. Don had many interests including woodworking, golfing, photography, gardening, computers, and fixing anything he could get his hands on. His greatest joy was spending time with his children and grandchildren. Don is survived in death by his wife Janet Crisup, their children Angie Sexton (Eddie) Orland Park, Il, Jeremy Crisup (Lisa) of Naperville, Il, Shannon Zoltek (John) of Chicago, Il, and Jamie Davis of Decatur, IL; siblings, Dennis Bouillon (Patty), Kenny Bouillon (Debbie), Pat Bouillon (Georgeann), Keith Bouillon, Ann Wernsing (Theron) all of Carlinville, IL; step siblings, Denzil Bartison (Barbara) of Decatur, IL, Jeanette Moniz of Decatur, IL; adopted sister, Cheryl Freeman of Indiana; grandchildren, Camryn , Lauren and Jacob Sexton, Madison and Gunner Davis, Abby Crisup, Alaire Zoltek and many nieces and nephews. He was preceded in death by his biological parents, Willard and Francis Bouillon, adoptive parents, and step mother, Grace Crisup, and sister, Mary Margaret Clevenger. The Graceland Fairlawn Funeral Home has been entrusted with the care of Donald. Condolences may be left to Don’s family at www.gracelandfairlawn.com.

The family of Donald D Crisup created this Life Tributes page to make it easy to share your memories.

Donald D. Crisup, 74, of Decatur, Il passed away peacefully on...

Send flowers to the Crisup family.