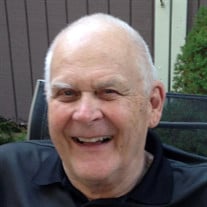 Donald H.H. Wachter, 87, of Champaign passed away peacefully at home on April 15, 2022. Don was born on February 16, 1935 in Granite City, IL, the second child of William and Frieda Wachter. On January 26, 1957, he married Sarah “Sally” DeVault. Don graduated from Illinois State University with a BS in Education and Master's Degree. He was a four-year letterman on the ISU football team. He also won the Redbird Award for athletes with a high academic record. He received his Educational Doctorate from the University of Illinois in 1975. He spent his entire career in education, mainly in Decatur School District #61. He was a special education teacher, coach, and administrator. In addition, he spent 6 years working for the Delaware Department of Public Instruction as a special education consultant and Director of Curriculum and Instruction. He was Superintendent of Schools in Decatur when he retired in 1993 after 36 years in education. Don served in the Army Reserves. He was on active duty in Fort Chaffee, AR for 6 months, and in the reserves for 6 years. He was a strong leader, a great dad, an avid reader and puzzle solver. He was a fun travel partner, enjoyed cruising and exploring the world. The seashore was his favorite place to visit, especially Rehoboth Beach, DE and Topsail Island, NC. Don is survived by his wife, Sarah “Sally”; sons, Scot (Cindy), Bret (Jodie), Kurt (Bridget), and Matt (Stacy); 8 grandchildren, Philip, Anna, Ryan, Brooke, Tim, Jeff, Alexandra, Emily; nieces, Lauren Fecte and Joan Breitegam. Don was preceded in death by his parents and brother, Bill. Cremation services will be provided by Graceland-Fairlawn Funeral Home in Decatur, IL. A celebration of Don’s life will be held on Saturday, May 21 from 1 to 4 pm at 2701 Windward Blvd, Champaign, IL All are welcome to come and express their appreciation for a good man. Memorials may be made to the Decatur Public Schools Foundation or the Decatur Public Library. Condolences may be sent to Don’s family at www.gracelandfairlawn.com

The family of Donald Harley Henry Wachter created this Life Tributes page to make it easy to share your memories.

Send flowers to the Wachter family.