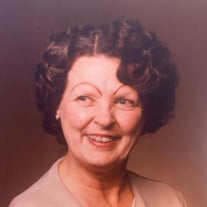 Dorothy L. Bell, 88, of Mt. Zion, IL, formerly of Oakley, passed away June 2, 2022 at her residence. She was born April 10, 1934 in Decatur, IL, the daughter of William C. and Elsie D. (Kemp) Ellis. Dorothy married James R. Bell on January 31, 1953 in Decatur, IL. After Jim's military service, they settled in Oakley, where they raised their family and lived for over 63 years. Dottie was a homemaker who put her children and family above herself. When not caring for others, she enjoyed crossword puzzles, western movies, embroidery and other needlework. She was an avid St. Louis Cardinals fan. She is survived by her three daughters, Penelope Hicks of Mt. Zion, IL, Ramona (Thomas) Benedict of Phoenix, NY and Tammy (Jim) Cook of LeRoy, IL; six grandchildren, Nick (Alix) Hicks, Jacob Cook, Josh (Melanie) Cook, Emily (Michael) Linn, Nathan Cook and Tyler Cook; and four great-grandchildren. Dottie was preceded in death by her parents; husband, James; sons, James R. Bell, Jr., Rodney W. Bell, infant twin boys at birth; and recently, son-in-law, Gerald Hicks. Graveside memorial services will be announced at a later date. Dorothy’s family would like to give special thanks to Memorial Home Hospice nurses and staff for the care they provided. The Graceland Fairlawn Funeral Home has been entrusted with the care of Dorothy. Memorials: Alzheimer’s Foundation, American Lung Association, or Wounded Warrior Project. Condolences may be left to Dorothy’s family at www.gracelandfairlawn.com.

The family of Dorothy L Bell created this Life Tributes page to make it easy to share your memories.

Send flowers to the Bell family.