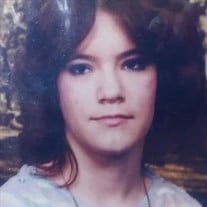 Ginger Lee Kennedy, 54, departed this life on Monday, January 17th, 2022, in her home. A visitation will be held from 10am to 12pm on Thursday, January 27, at Graceland Fairlawn Funeral Home. Cremation services will be provided by Graceland Fairlawn Crematory at a later date. Ginger was born and raised in Decatur, IL on February 8th, 1967 to the union of Ted and Alice Kennedy. A young wife and mother of 3 sons, Ginger was the life of the party who enjoyed karaoke and “dancin’ in the street”. A few of her favorite things were her games (Canasta, Solitaire, Spades and Sonic the Hedgehog on Sega), unicorns, the color purple, and silly moments with her sons. She had a forever love for her children, her music, and her famous “Pasta Salad”, that she even sang a tune to while cooking. Ginger was a great friend, had a good heart, and will be dearly missed by those that love her. Ginger leaves to cherish, not to mourn, 3 sons: Tim (Linda) Waggoner of Lebanon, TN, Anthony Waggoner of Decatur, IL, and James (Tyneria) Waggoner II of Decatur, IL; Siblings: Stella Mae Kennedy of Decatur, IL, Teddy (Cindy) Kennedy of Hillsboro, IL, Candy (Randy) Zinn of Decatur, IL; 4 granddaughters, 5 grandsons; Best Friends, Alicia (Brett) Riedel of Sullivan, IL, Tammy Jackson of Decatur, IL; Special Friend, Mark Turnbo of Decatur, IL, and a host of family and friends. She was proceeded in death by her father, Ted Kennedy and her mother, Alice Kennedy. Let her life and death always serve as a reminder to love those that are close to you, no matter the situation. Death is inevitable, Life comes with the unexpected, and of these, love will always remain.

Ginger Lee Kennedy, 54, departed this life on Monday, January 17th, 2022, in her home. A visitation will be held from 10am to 12pm on Thursday, January 27, at Graceland Fairlawn Funeral Home. Cremation services will be provided by Graceland... View Obituary & Service Information

The family of Ginger Lee Kennedy created this Life Tributes page to make it easy to share your memories.

Send flowers to the Kennedy family.