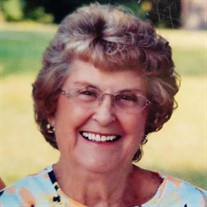 Decatur – Gwendolyn Ann “Gwen” (Drollinger) Altherr, 92, of Decatur, passed away Saturday, February 5, 2022, at HSHS St. Mary’s Hospital, with her family by her side. Gwen was born December 29, 1929, in Champaign, IL, a daughter of Howard and Helene (Pflum) (Drollinger) McGlughen. She was married at the age of 18 to the love of her life Ronald Francis Altherr and together they shared 73 wonderful years together. They began their journey in Marion, IN, where her first child, Kathleen Marie, was born. Her second child, Michael Francis, soon followed. After following Ron’s job to Decatur, IL, she gave birth to her third and fourth children, Steven Craig and Jane Lynette. With the fourth addition the two-bedroom became too small, and they decided to move to a home at 54 Sundale Drive, where they have been ever since. She was mother and homemaker until the youngest was ready for school. Gwen began working at St. Mary’s Hospital as a surgical tech and worked there for seven years, only taking off the summer months to stay home with the kids. When her job was filled that last summer, she started working with oral surgeons Dr’s Jurgens and Jurgens. Two years into her work there her last child, Timothy Scott was born. The doctors were great and allowed her space to raise Tim in his younger years and she ended up staying with them for twenty-five years. After retiring, the two adventurers bought an RV and spent the next twenty years wintering in Texas and traveling the U.S. She loved sewing, crocheting, and was very active at bowling and playing golf, winning tournaments into her 70’s. Gwen had a “green thumb” and could get anything to grow. She was a devout Christian who faithfully attended Holy Family Catholic Church. Gwen was preceded in death by her parents, son Michael Francis, brother Leo Drollinger, and twin grandsons. Surviving is her husband, Ronald of Decatur; children: Kathleen (Michael) Lowery, Steven (Kathryn) Altherr, Jane (Ron) Blankenship and Timothy (Tricia) Altherr; grandchildren: Seth, Evan, Jordan, Derek, Ross, Erik, Jared, Kristin, Christopher, Ryan, and Megan; great grandchildren: Jacob, Christian, Micah, Lilian, Hannah, Theodore, Caleb, Ava, Emma, Declan, Victoria, Miles, Max, Maverick, and Evelyn; daughter-in-law Donna Altherr; sister Patricia Smith; many nieces, nephews, other relatives and friends. Visitation will be Wednesday, February 9, 2022, from 10 am until the Mass of Christian Burial at 11 am at Holy Family Catholic Church. Burial will be at a later date at Mt. Gilead Cemetery. In lieu of flowers, memorials are suggested to St. Jude Children’s Research Hospital or Holy Family Catholic School. Graceland/Fairlawn Funeral Home and Cremation Center is in charge of the arrangements. Condolences and memories may be shared at www.gracelandfairlawn.com.

The family of Gwendolyn Ann "Gwen" Altherr created this Life Tributes page to make it easy to share your memories.

Send flowers to the Altherr family.