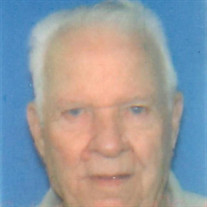 Harold Smith Sr. 94 of Blue Mound, formally of Forsyth died Wed. Feb. 10. 2021 in DMH of a heart attack. Harold was born June 30, 1926 in Kansas City, Mo. to William and Elizabeth Lanham Smith. He married Joan McCay in 1944. She preceded him in death in 1963. He married Naomi Cotton in 1969. She preceded him in 1999. Surviving is his son, Harold (Butch) Smith and wife Betty of Blue Mound; Seven grandchildren: Bill (Monica) Smith of San Diego, Calif., Dusty (Jim) Goodrich of Blue Mound, Joan (Jerome) Buckner of Texas, Susie (Chad) Humpries of Texas, Shanta (Harvey) McNew of North Carolina, Josh (April) Whitten of Missouri and Elijah Whitten of Texas; several great grandchildren; step grandchildren. Several nieces and nephews that he was fond of. He was preceded in death by both wives, daughter Debbie Whitten and husband Frank, one great grandson, 3 step-children: Doris Hawkins, Darlene Depew, and Larry Cotton. Three sisters: Gladys Payne, Marie Lanham and Rozella Justice. Harold was in the Army during World War II from 1944 to 1946 stationed in Central Europe. He worked at Forsyth Lumber, Huff Lumber, and retired from Caterpillar. Harold enjoyed travelling, his place in Missouri, and auctions. The family would like to give special thanks to his nurse, Lynette, who was with him to the end. Graveside services to celebrate Harold’s life will be at 11:00 AM Monday, February 22, 2021 at Fairlawn Cemetery, with military graveside rites. Visitation will be from 10:00 –11:00 AM on Monday, February 22, 2021 at Graceland/Fairlawn Funeral Home, Decatur. The family has requested casual attire. CDC guidelines will be followed, and face masks are required for those in attendance. The family of Harold Smith, Sr has entrusted Graceland/Fairlawn Funeral Home, Decatur with funeral arrangements. Please view his obituary, and share memories and condolences at www.gracelandfairlawn.com

The family of Harold W. Smith Sr. created this Life Tributes page to make it easy to share your memories.

Send flowers to the Smith family.