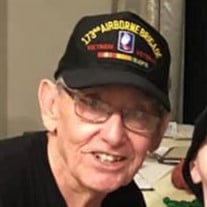 Harry Darrell Shaw Sr. 82 of Oreana passed away on October 31,2021 at Decatur Memorial Hospital in Decatur IL. Harry was born June 14, 1939 to Russell and Rosella Shaw. He graduated high school in 1957 and went straight to Army where he was... View Obituary & Service Information

The family of Harry Darrell Shaw Sr. created this Life Tributes page to make it easy to share your memories.

Send flowers to the Shaw family.