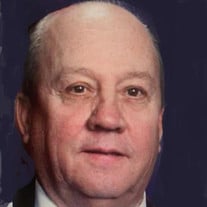 JD Kelsheimer, 92, of Fishers, IN (formerly of Decatur, IL) passed away Jan. 20, 2022 Born Feb. 23, 1929 to Homer and Anna Kelsheimer. He married the love of his life, Winona Cross, on June 3,1946 in Corinth, Mississippi. They celebrated 73 years of marriage before Winona passed away. He never got over losing her and eagerly looked forward to being reunited with her in heaven. He held many jobs in his life. He worked at a garment factory, Parke Warehouse, built homes with his father, Homer, worked at Norfolk railroad, before becoming a licensed plumber, owning his own business. He worked into his 80’s before retiring. JD was a member of the Moundford Free Methodist Church in Decatur, IL. He was an extremely hard worker. There was nothing he couldn’t do. He loved the Lord and read his Bible every day until his eyesight wouldn’t allow him to read anymore. While he was in the nursing home he was so proud to be able to offer everyone coming into his room an Orange Crush and a snack. He had exceptional care from everyone at Hamilton-Trace in Fishers, IN. He is survived by son, David (Kyle) of Rocky Mount, VA, daughter, Brenda Wetter (Robert) of Fishers, IN, son, Jeffrey (Gina) of Decatur, IL. Eight grandchildren, five great-grandchildren, preceded in death by his parents, one brother, three sisters, his loving wife, Winona, daughter, Kathleen Meier, and granddaughter, Mollie Wetter. The family requests no flowers, instead, memorial contributions are suggested to be made to Moundford Free Methodist Church, Decatur, IL The family of JD Kelsheimer is being served by Graceland/Fairlawn Cemetery. Condolences may be left to his family at www.gracelandfairlawn.com.

The family of JD Kelsheimer created this Life Tributes page to make it easy to share your memories.

Send flowers to the Kelsheimer family.