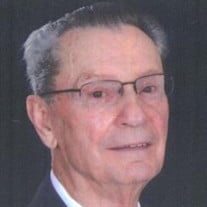 Joe Delos Josserand, 98, of Forsyth, IL, passed away on Tuesday (01-25-2022) in his residence. Joe was born on November 17, 1923 in Decatur, IL, the son of Joseph Delos Josserand and Ruby Fern (Ruffner) Josserand. He married Dorothy McCoy on February 24, 1945 in Decatur, IL. She preceded him in death on March 5, 2014. Joe served his country in the United States Army Air Force for 3 years during WWII, serving 1 year in China as a top turret and tail gunner for 39 missions on a B-25 bomber. Joe was a member of Texas Christian Church, a life member of the V.F.W. Post # 99, and a member of the Cat Retiree Club. Joe was a metal worker and a Planning Processor at Caterpillar; where he worked 28 years, retiring in 1983. He also liked being outside, mowing, doing woodworking and spending time with his family as a loving husband, father and grandfather. Joe is survived by his daughter Sharon Titus and husband Tom of McKinney, TX; daughter-in-law Carol Josserand of Indianapolis, IN; grandchildren: Kimberly Ann Clark and husband James of Frisco, TX, and Ryan Josserand of Indianapolis, IN; great-grandchildren: Katie, Sophia, Joe, Aiden, Elena, Jaci, Tayler and Shane. He was preceded in death by his parents, wife, son Larry Joe Josserand, grandson Jason Josserand, granddaughter Alicia, and two brothers John Lewis Josserand Jack Josserand. Funeral services will be at 12:00 P.M. Thursday (02-10-2022) at Graceland Fairlawn Funeral Home with visitation one hour prior to service time. Entombment will be in the Star of Hope Mausoleum. Memorials may be made to: Texas Christian Church or Tunnels to Towers Foundation. Condolences may be left to the family at www.gracelandfairlawn.com Funeral services will be streamed at www.funeralvue.com/login/event#68776.

Joe Delos Josserand, 98, of Forsyth, IL, passed away on Tuesday (01-25-2022) in his residence. Joe was born on November 17, 1923 in Decatur, IL, the son of Joseph Delos Josserand and Ruby Fern (Ruffner) Josserand. He married Dorothy McCoy... View Obituary & Service Information

The family of Joe Delos Josserand created this Life Tributes page to make it easy to share your memories.

Joe Delos Josserand, 98, of Forsyth, IL, passed away on Tuesday...

Send flowers to the Josserand family.