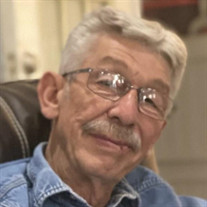 John Warren Ferriell, 73 of Decatur, passed away on June 4, 2021, at St. John’s Hospital in Springfield. He was attended by his son J.D. and daughter Mary Jo at his passing. Services will be held on Wednesday, June 9, 2021, at 10:00 AM to 12:00 PM at Graceland-Fairlawn Funeral Home on Oakland Avenue in Decatur. Burial will immediately follow the visitation. John was born on July 5, 1947, at Vincennes, Indiana, the son of Warren and Mary Lou Ferriell. At a young age the family moved to Decatur, Illinois, where John attended Decatur public schools. John married the love of his life, Rosemary Quick, in Decatur on September 7, 1979. John is survived by his wife of 41 years; brothers Mark and Thomas Ferriell, Decatur; one son, J.D. (Nicole) Ferriell, Decatur; three daughters, Mary Jo (David) Leimbach, Milan, Tennessee; Angela (Steve) Bertolis, Macon; and Kelly (Douglas) Boerma, Warren, Michigan; six grandchildren, two great-grandchildren, and one special nephew, Alan (Brittany) Ferriell, Harristown as well as many extended family and friends. John was preceded in death by his parents. John was a veteran of the United States Army, having served from 1964-1967. John was especially proud of the fact that at 17 years old, he was one of the first ground troops to deploy to Vietnam with the 1st Engineer Battalion, MACV-SOG, at Cam Ranh Bay. John’s medals and decorations include: the Army Good Conduct Medal, the National Defense Service Medal, the Republic of Vietnam Campaign Medal with 1960 device, the Vietnam Service Medal with three bronze stars, the Republic of Vietnam Gallantry Cross with palm device, and the Army Service Ribbon. After returning from Vietnam, John was hired on at Caterpillar in Decatur, where he would serve in a variety of positions over the years. John retired as a salvage welder from Caterpillar in 2010 after 43 years. John was a simple man who lived life on his terms, who was proud of what he had accomplished in life. He was a proud member of UAW Local 751, proud to work for Caterpillar and never missed a shift at work or on the picket line. John loved his Chevy trucks, hotrod cars, drag racing, blue denim clothes, western boots, and traveling to Tennessee to see his “ribbit buddy” (granddaughter Aubrey). He will be missed. The family requests that denim be worn in honor of John.

The family of John Ferriell created this Life Tributes page to make it easy to share your memories.

Send flowers to the Ferriell family.