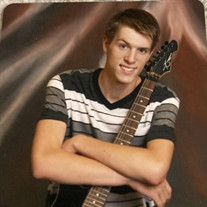 Jordan Matthew Peters, age, 27, departed this earthy life and entered into his heavenly home on August 2, 2021. Jordan was born on July 27, 1994 in Decatur, IL to Stephen Peters and Rebecca (Rutherford) Porchey. He is survived by his mother Rebecca (Bo) Porchey, father Stephen (Tammy) Peters, grandmother Doris Rountree, grandfather Paul Norris, brother Austin Peters, sisters Brooke (Brett) Smith, Haley Peters, niece Emilie Smith, nephew Collin Board, and several aunts, uncles, and cousins. He was preceded in death by his grandparents Timothy & Sandi Peters. He spent his early childhood days in Decatur, IL and later moved to Phenix city, AL with his family. In 2013, he graduated from Smiths Station High School in Phenix City, AL. He signed up to serve in the Navy. During boot camp at The Great Lakes Naval Station, he was recognized for outstanding leadership and quick-thinking skills. Most recently, he returned to his birthplace and early childhood home in Decatur, IL and he worked as a skilled welder, taking pride in quality craftsmanship. While on this earthly journey, he touched many lives along his path. His zest for life and sense of adventure led him to live in the moment and to live every day to the fullest. He was a passionate musician/guitarist with an enthusiasm for rock. He was an avid comic-con fan. He was the type of person to stand out from the crowd. He could make anyone smile and had a knack for lighting up any room he walked into. His sweet soul will be deeply missed by all who knew him. A celebration of Jordan’s life will be held at a later date. The family of Jordan Peters has entrusted Graceland/Fairlawn Funeral Home, Decatur, IL with cremation services. Please share memories and condolences at www.gracelandfairlawn.com

Jordan Matthew Peters, age, 27, departed this earthy life and entered into his heavenly home on August 2, 2021. Jordan was born on July 27, 1994 in Decatur, IL to Stephen Peters and Rebecca (Rutherford) Porchey. He is survived by his mother... View Obituary & Service Information

The family of Jordan Matthew Peters created this Life Tributes page to make it easy to share your memories.

Send flowers to the Peters family.