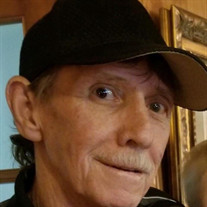 Leslie “Ray” Watts took his last breath on April 15, 2021. He was born on Oct 10, 1950 in Union City, TN. He lived in Decatur, IL and Adamsville, TN. He leaves behind his love, Shirley Watts of Decatur, IL, and the 33 years that they spent together. He was the dad of Casey Watts of Ramsey, IL, Jeremy Watts of Clermont, FL, Jessie Bodine of Savannah, TN, and Crystal Watts of Decatur, IL. He was the son of late Marvin and Annie Watts of Waverly, TN. They had 9 children. His brothers and sisters were Shirley Matlock of Morris Chapel, TN, Richard Watts of Niantic, IL, Clara Watts of Saltillo, TN, Marilyn Watts of Saltillo, TN, Katie Shelby of Savannah, TN, Johnny Watts of Morris Chapel, TN, Patricia Watts of Adamsville, TN, and late Roy Watts of Morris Chapel, TN. Dad always had a joke and a distinct laugh that could get you laughing. He would always greet you with an “Aaaay” that made you know that you were welcome and that he appreciated you coming by. He always left you with a hug and an “I love you”. He loved spending time with his grandkids Zachary Watts, Haley Watts, Braden Watts, Kaile Bodine, Bella Bodine, and Owen Watts. Dad enjoyed drag racing, Nascar, gardening, tinkering, antiquing and flea marketing and his dogs. He retired from the Labor Local 159 in Decatur, IL where he was a member since 1969.

The family of Leslie Ray Watts created this Life Tributes page to make it easy to share your memories.

Send flowers to the Watts family.