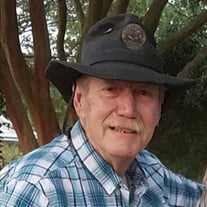 Malcolm Dale Himes, 71, passed away on December 30, 2021, at his residence in Mount Zion, IL. Malcolm was born to Wendell Dale Himes and Flora Elizabeth Himes on October 13, 1950, in Decatur, IL. In 1986, he married Robin Jeanne Litteral at the Wesley United Methodist Church, of which he was a member. SGT Himes served proudly in the US Army during the Vietnam War from November of 1970 to November of 1971, never regretting his service to his country. Being a veteran of the Vietnam War was a very important part of who he was, and he remained steadfast in his love of country throughout his life. He worked as a carpenter for the majority of his life and ran his own carpentry business. However, his greatest achievement in life was being a loving father to his son, Matthew, passing on his skills, knowledge, and wisdom. When his son joined Scouts, he served as the assistant Scoutmaster of Troop 43 for many years and never missed a Flag Retirement Ceremony the troop would hold. His hobbies included camping, hiking, woodworking, and watching sports, especially football. His favorite football team was the Seattle Seahawks, and his favorite baseball team was the Chicago White Sox. He had a green thumb and enjoyed gardening, particularly planting wildflowers. He was also an avid history buff, an ardent collector of anything ducks, trains, and vintage trucks, and was a connoisseur of coffee, wine, and gin. He also enjoyed visiting wineries with his son on all the journeys they set out on. Malcolm is survived by his son Matthew Himes, sisters Cynthia (Don Pritchett) Rambo and Lynn (Jerry) Sapp, 2 nieces, 2 nephews, and many extended family and friends. Malcolm is preceded in death by his parents Wendall and Flora Himes, wife Robin Himes, and sister Doris Varvel. The family would like to thank all those who helped Malcolm through all his trials and tribulations over the past few months. Services will be held on Thursday, January 6, 2022, at 11:00 AM at Graceland Fairlawn Funeral Home. A visitation will be held on Thursday, January 6, 2022, from 10:00 to 11:00 AM at Graceland Fairlawn Funeral Home. The Burial will be held at Camp Butler National Cemetery on Thursday, January 6, 2022, at 1:00 PM. In lieu of flowers, donations to the funeral funds would be greatly appreciated by the family. Condolences may be sent to Malcolm's family at www.gracelandfairlawn.com.

Malcolm Dale Himes, 71, passed away on December 30, 2021, at his residence in Mount Zion, IL. Malcolm was born to Wendell Dale Himes and Flora Elizabeth Himes on October 13, 1950, in Decatur, IL. In 1986, he married Robin Jeanne Litteral at... View Obituary & Service Information

The family of Malcolm Dale Himes created this Life Tributes page to make it easy to share your memories.

Send flowers to the Himes family.