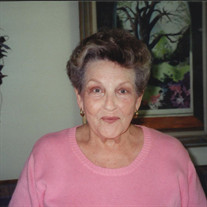 Marjorie Mozelle Ellis was born Marjorie Mozelle Griffin on November 4, 1922, in Andalusia, AL. She married Herbert Joseph Bohnert, April 11 1941. He was a pilot during WWII flying paratroops and supplies to the South Pacific on 240 missions. They had 3 children, Cherry Mozelle Bohnert Benson born on January 24, 1946, Murray Jay “Shot” Bohnert born January 16, 1947, who passed December 20 2013, Kristel Dawn Bohnert Quinlan, born September 23, 1953, who passed on November 8, 2020. Marjorie divorced Herbert in October of 1960 and Herbert passed in June 1981. Marjorie owned the Red-Carpet Beauty Salon for 26 years with 8 ladies working with her in Rantoul, IL. She married Dr. Earl Ray Ellis OD November 11, 1971 and divorced 1997 after 26 years of marriage. Earl passed in August of 2000. After Marjorie sold the salon, she became a travel agent for 12 years and traveled all over the world. She went to China, Russia, Africa, Australia and the holy lands. She and her daughter Cherry bought a house 22 years ago and she spent her time painting all of the oil painting in the house. Her and Cherry made a beautiful home that they shared until her passing. In August of 2021 they drove to Alaska and had more fun than a barrel of monkeys. Cherry will miss her mother deeply. Marjorie was truly her best friend. Marjorie also survived by 11 grandchildren, 20 great grandchildren, 3 great-great grandchildren and Step-daughter, Rebecca Ellis. A visitation will be held on Monday, February 28, 2022 at Graceland Fairlawn Funeral Home from 5-7pm. Arrangements by Graceland Fairlawn Funeral Home 2091 N. Oakland Ave, Decatur, IL 62526. Condolences and memories may be shared at www.gracelandairlawn.com

Marjorie Mozelle Ellis was born Marjorie Mozelle Griffin on November 4, 1922, in Andalusia, AL. She married Herbert Joseph Bohnert, April 11 1941. He was a pilot during WWII flying paratroops and supplies to the South Pacific on 240 missions.... View Obituary & Service Information

The family of Marjorie Mozelle Ellis created this Life Tributes page to make it easy to share your memories.

Send flowers to the Ellis family.