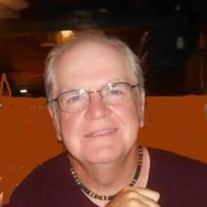 Mark E Quinlan Sr, 68, Decatur, passed away, Sunday November 7, 2021 in his home with family by his side. Private graveside services will be held. Everyone is welcome to join the family at Sliderz at 4:00 pm, Sunday, November 14, 2021, to share stories and visit. Memorials may be directed to the Macon County Honor Guard. Mark was born on November 10, 1952 to James and Betty Quinlan. He married the love of his life, Gina, on April 15, 1994 in Decatur. Mark served our country with the US Army for over seven years before he was honorably discharged. He retired as a Sgt with the Macon County Sheriff Office, within the corrections department. Mark loved to watch his movies, was an avid shooter and enjoyed shooting with Steve and Jason. For many years he was very active in working on and building computers. He enjoyed yard work and mowing with his tractor that he waited so many years for. He was very connected to the officers who worked for him, and staying in contact with several after retirement. He was very proud of his military service and his blue GMC truck. It was his trophy for years of hard work and enjoyed taking it to events and shows. He was really into his truck. He never wanted anyone to worry about him. He also enjoyed taking pictures and spending time with friends and friends that were his family. Mark is survived by his son, Mark (Melinda) Quinlan Jr; daughter Lisa (Gary) Hopkins; brother; Richard Quinlan and family, sister; Jami and family, sister-in-law; Dana (Rick) Daniels, sister-in-law; Rhonda Dunlap, step mother-in-law; Virginia Gard, brother in law Michael (Amy) Pedersen, nine grandchildren and three great-grandchildren; and several nieces and nephews. We would like to say a special thank you to Jim, Steve, Jason, Gene, Janet, Vicki, & John for helping out when needed and being there when he needed you. You were all very dear to him. It was very much appreciated. He was preceded in death by his parents and wife, Gina.

Mark E Quinlan Sr, 68, Decatur, passed away, Sunday November 7, 2021 in his home with family by his side. Private graveside services will be held. Everyone is welcome to join the family at Sliderz at 4:00 pm, Sunday, November 14, 2021, to share... View Obituary & Service Information

The family of Mark Eugene Quinlan created this Life Tributes page to make it easy to share your memories.

Send flowers to the Quinlan family.