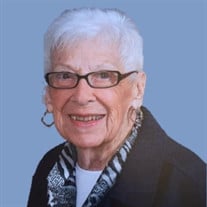 FORSYTH- Mary A. Gardner, 96 of Forsyth, passed away Saturday, April 10, 2021. Services to celebrate Mary’s life will be held at 11 am Friday, April 16, 2021 in the chapel of Graceland/Fairlawn Funeral Home. Visitation will be held from 10 am until the service time. Interment will be in Maroa Cemetery. Memorials are suggested to Cancer Care Specialists, in honor of her daughter Judy or to the Multiple Sclerosis Association in honor of her daughter Jane. Mary was born on November 12, 1924 in Champaign, the daughter of Alva John and Mabel I (Hoggins) Current. Mary dedicated her life to her family and helping her husband on the farm. She was a member of the Warrensburg United Methodist Church and later the Forsyth Methodist Church. Mary married G. Wesley Gardner on November 23, 1947 at the Forsyth United Methodist Church. They celebrated almost 63 years together before he passed away on September 12, 2010. Mary enjoyed quilting, growing flowers and cross stitching. Mary loved to support her great grandchildren by attending dance recitals and sporting events to cheer them on. Mary was a loving and devoted wife, mother, grandmother, and great grandmother. She had a life well lived. Surviving are her son- James L. Gardner of Bozeman, MT, son in law- Carl Hamilton of Latham, three grandchildren- Robin Hamilton (Tim Craw) of Warrensburg, Tina Hartwig (Colby Hoffman) of Forsyth, and Jarrod Hamilton of Decatur, and two great grandchildren Hunter Wesley Hartwig and Mikayla Marie Craw, and many nieces and nephews. Mary was greeted in Heaven by her parents, husband, two daughters- Jane Ellen Hamilton and Judith Ann Gardner, and two brothers- James (Alice) Current and John W. “Bill” (Barbara) Current, in laws- Billy E and Norabel Baker and Herman and Alice Gardner.

FORSYTH- Mary A. Gardner, 96 of Forsyth, passed away Saturday, April 10, 2021. Services to celebrate Mary&#8217;s life will be held at 11 am Friday, April 16, 2021 in the chapel of Graceland/Fairlawn Funeral Home. Visitation will be held from... View Obituary & Service Information

The family of Mary A Gardner created this Life Tributes page to make it easy to share your memories.

FORSYTH- Mary A. Gardner, 96 of Forsyth, passed away Saturday,...

Send flowers to the Gardner family.