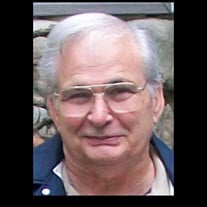 Maurice (Maurie) C. Brown, 78, of Decatur, IL. Died Wednesday, June 9, 2021 in is home with his family at his side. Maurice was born in The Methodist Home in New Orleans, LA. He was the first adopted child of Maurice C. Brown, Sr. and Frances Moore Pendleton Brown. Up to the age of 12 he lived in Baton Rouge LA. The family then moved to Decatur, IL and Maurie was educated in the public schools and graduated from Stephen Decatur High School. He always wanted to serve his country and after graduating enlisted in the Marine Corps and served 39 months. He married his high school sweetheart, Barbara Ann Eagleton, in 1961 and they celebrated their 60th Wedding Anniversary on May 28, 2021. Maurice retired after 30 plus years as a Machinist and Electrician at Caterpillar Tractor Co. and enjoyed spending time at his Wisconsin summer home fishing. Maurie was also an auto mechanic and spent many years working on old cars. His pride was the restoration of a 1947 Chevy and showed it in many classic Car shows. Maurice was also a member of the Grand Lodge of Free and Accepted Masons of Illinois for over 45 years and a Shriner in the Temple of Springfield, IL. He is survived by his wife, Barbara, his son Michael Lee Brown (Christine) and his daughter, Tracy Linn Cotton (Dave); Step-grand-daughters; Nicole Noel Mundelius, Jacki Rose Mundelius and Grace Georgia Mundelius; grandchildren; Dustin Lee Brown (Jessica), Kyle David Cotton (Wife, Melissa), Whitney Ann Newton (Jarrod) ; Great-grandchildren: Jaxsen Lee Brown, Layla Maryn Brown, Everly Ann Brown, Riley LeAnn Cotton, Liam Hunter Cotton, Luke Kyle Cotton, Sawyer Aloysius Newton and Aspen Scott Newton. He is also survived by a sister, Judith Don Wagner (John) of Decatur, IL and a brother Terry Lee Brown of Van Horn, Texas. He also leaves many nieces and nephews along with his dog, Buddy. He was preceded in death by his parents, Maurice and France Brown and a very special aunt, Annah Joe Pendleton. A graveside service will be held 11:00 AM Friday, June 25th, 2021 at Graceland Cemetery and Funeral Home, 2091 N Oakland Ave, Decatur, IL. As per his request, Cremation Rites will be granted. Internment will take place at the service.

Maurice (Maurie) C. Brown, 78, of Decatur, IL. Died Wednesday, June 9, 2021 in is home with his family at his side. Maurice was born in The Methodist Home in New Orleans, LA. He was the first adopted child of Maurice C. Brown, Sr. and Frances... View Obituary & Service Information

The family of Maurice Brown created this Life Tributes page to make it easy to share your memories.

Send flowers to the Brown family.