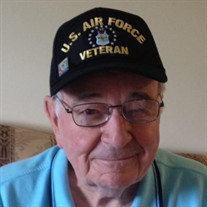 ROBERTS, Phillip Ray, 88, passed away in his home, November 30, 2021. A private family viewing will be at Graceland/Fairlawn and a memorial service for Phill will be announced in 2022. Phill was born in Decatur, IL, May 16, 1933, the son of Ray Ervin and Edna Grace (Phillips) Roberts. Phill married Judith Barnes in 1956, and fathered three children. He married Donalee Shepley in 1987. He married Loretta in 2017. As a youth, Phill attained the honor of Eagle Scout. He served in the USAF, 1953-1955, at Lackland AF Base, Texas, where he was a navigator and a math instructor. He received a B.A. in Business from the University of Illinois. He was an avid fan of the Fighting Illini, the Green Bay Packers and the St. Louis Cardinals. His career in banking/finance spanned many years and he often said, "once a banker, always a banker". He was president of AMBUCS, served on the Macon County Property Tax Review Board, and other civic responsibilities. He served as manager of his sons little league baseball teams, treasurer of NW Little League Baseball, coach and assistant coach for JFL. Phill enjoyed his travels abroad, in the U.S. and local day trips. He traveled on a Land of Lincoln Honor Flight, October 2015, to Washington, D.C. He attended the First Baptist Church on Arbor Drive, and directed the men's groups in his community. Survivors: Wife, Loretta, children Debbie Thomas, (Van), Decatur, Mark Roberts (Gloria), Texas, David Roberts (Tammy), Decatur, 9 grandchildren, 7 great-grandchildren, and a host of friends. Phill's parents, infant sister, brother, Ervin, and wives, Judith and Donalee preceded him in death. Memorials: First Baptist Church, Arbor Dr, Decatur, IL and Salvation Army. Arrangements by Graceland Fairlawn Funeral Home 2091 Oakland Ave., Decatur, IL 62526. Condolences and memories may be shared at www.gracelandfairlawn.com

ROBERTS, Phillip Ray, 88, passed away in his home, November 30, 2021. A private family viewing will be at Graceland/Fairlawn and a memorial service for Phill will be announced in 2022. Phill was born in Decatur, IL, May 16, 1933, the son... View Obituary & Service Information

The family of Phillip Roberts created this Life Tributes page to make it easy to share your memories.

Send flowers to the Roberts family.