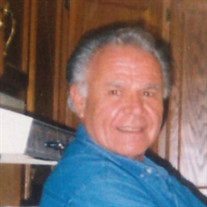 Reynaldo Tapia, Jr., 77, of Decatur, IL passed away Sunday January 31, 2021 at Decatur Memorial Hospital. Rey was born October 19, 1943 in Palo Alto, CA to Reynaldo O. and Francis Baca Tapia. Rey is survived by his wife Shirley (Benner) Tapia; his two daughters: Ursula (Jeff) Mesnard; Ann (Barry) Rohman; and his son Chris (Katerina) Tapia, all of Decatur, IL; 8 Grandchildren: Emily and Chloe Mesnard; Trystan, Trinity, Taylynn and Benjamin Tapia; and Christian and Lauren Tapia; sisters: Angela (Johnny) Guzman, Stella Stines, and brothers: Ricardo Tapia and Ruben Tapia; and many nieces and nephews. He was preceded in death by his parents, sister Gloria Moreno, and his son Reynaldo Tapia, III. Rey spent 20 years in the United States Navy, and after retiring, he worked for the United States Postal Service for 27 years. He was an avid San Francisco 49ers and Chicago Cubs fan, and loved watching his grandchildren play sports. He will be very much missed by his little sidekick and best friend, Goldie, his 4-year-old Pekingese. Rey’s family would also like to extend their sincere gratitude and appreciation to the nursing staff and doctors in the ICU who took care of him until the end. Services to celebrate Rey’s life will be held at 7:00 PM on Friday (Feb. 5, 2021) at Graceland/Fairlawn Funeral Home, Decatur. Visitation will be held from 5:00PM-7:00 PM on Friday at the funeral home. CDC guidelines will be followed, and face masks are required for those in attendance. The family does request casual attire. Services will be livestreamed at http://webcast.funeralvue.com/events/login/event#47425 The family of Rey Tapia, Jr has entrusted Graceland/Fairlawn Funeral Home, Decatur, with final arrangements. Please view his obituary, and share memories and condolences at www.gracelandfairlawn.com

The family of Reynaldo Tapia Jr created this Life Tributes page to make it easy to share your memories.

Send flowers to the Tapia family.