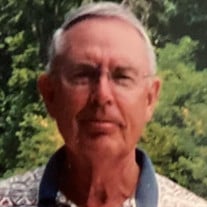 Decatur - Richard Barnett, of Decatur, passed away Wednesday January 12, 2022, at HSHS St. Mary’s Hospital. Born to William G. and Frances Barnett, Richard was shown early on that hard work, dedication, and gratitude were the keys to a happy life. In middle school he met the love of his life, Doris, and they married in college. During their time at the U of I they became devoted and lifelong Illini basketball fans. Richard played tenor saxophone in the school’s marching band and the Ben Bradley Band in addition to raising 3 kids. His drive helped him become a competitive league bowler, an exceptional golfer, and excel at every sport he took on. He was very committed to, and accomplished in, his career as a registered professional engineer at Tate & Lyle (A.E. Staley), but family vacations were a priority and highlight in his life. Spending this quality time with his loved ones was wholeheartedly cherished. As a man of the Methodist faith and member of South Side Country Club, he never forgot the importance of community. Richard never let an opportunity pass by to show those close to him that they were loved. He was a true gentleman and treated everyone with respect. There will be an emptiness in the world where he once stood. Surviving are his wife Doris; children: William (Kelli), Diana (Thomas), and Barbara; grandchildren: Jessica, Justin (Kevin), Zachary, Dylan, Macy, Aaron, and Lyndsey; great grandchildren: Harper and Harrison; niece Debbie (Jon); cousins and friends. Richard was preceded in death by his parents and his beloved sister, Joanne. A Celebration of Life will be held at a later date. Memorial donations may be made in his name to any charity close to your heart. Suggested organizations are AMBUCS, Piatt County Animal Shelter, and St. Jude’s Hospital. The family of Richard Barnett is being served by Graceland/Fairlawn Funeral Home and Cremation Center, 2091 N Oakland Ave, Decatur, IL 62526. Condolences and memories may be shared at www.gracelandfairlawn.com.

Decatur - Richard Barnett, of Decatur, passed away Wednesday January 12, 2022, at HSHS St. Mary&#8217;s Hospital. Born to William G. and Frances Barnett, Richard was shown early on that hard work, dedication, and gratitude were the keys to... View Obituary & Service Information

The family of Richard G. Barnett created this Life Tributes page to make it easy to share your memories.

Send flowers to the Barnett family.