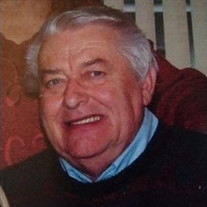 Richard “Dick” Byron Evey (85) passed away peacefully at home in Decatur, IL with family by his side on Friday, May 27, 2022. Richard was born in Decatur, IL on October 22, 1936, the only child of Byron and Angeline (Hogue) Evey. He grew up in Decatur and Clinton, IL where he made lifelong friends. He attended both Clinton High and Decatur High School graduating from the latter in 1955. Richard was inducted into the United States Army in 1959 and was stationed at The Presidio in San Francisco when he was honorably discharged in 1962. He then returned to Decatur and resumed working at Illinois Power retiring from there as a computer operator in 1996. He spent most of his life in Decatur but also lived a number of years in Stonington, IL. Richard married Wanda (Garner) Evey on September 30, 2000 at the Stonington United Methodist Church. She survives along with their sweet Yorkie, Tessie. He also leaves behind his three children from his first marriage to Jayne: daughter, Linda Gaffron (Charlie Sams); son, Richard (Andrea) Evey; daughter, Leslie Evey (Danny Manning); grandchildren: Jackson Hogan and Amelia Evey; Wanda’s three adult children: Lisa (Faron) Poling, Richard (Becky) Gaffron, and Randy Knittle as well as their respective families. To say that Richard was one of a kind would be an understatement. He was genuine, honest, and always spoke his truth. Richard was not one to conform in order to fit in. He was a champion of the working man and served as a union steward and president of his local IBEW while employed at IL Power. Richard was not one to hold back on calling people out when he disagreed with their motives or ethics and was well known for his colorful vocabulary. He never met a used car salesman or politician that he liked and had an innate distrust of them. In his later years, his armchair sport was toying with telemarketers who invaded his privacy. Richard worked hard and lived simply. He did not like to spend money and was known for being thrifty. He earned his way in this world and never wanted to be beholden to anyone. A well-stocked workshop is what made him truly happy. He was highly intelligent and liked to do “figures” in his head. He applied these math skills to his woodworking, a hobby he greatly enjoyed. Richard built many beautiful pieces of furniture over the years preferring a Shaker style aesthetic. He was an avid reader and enjoyed books on history and the mob. He also set an unofficial world record for reading “Salem’s Lot” by Stephen King the greatest number of times. Richard used to fish frequently at The Wharf on Lake Decatur. He once caught a 40+ pound catfish that he brought home to show off before releasing it back into the lake. Richard also enjoyed watching local car races when he was younger. He was the neighborhood mechanic before cars became computerized. Richard had a strong memory and could tell story after story about his life and what used to be situated on every corner of Decatur and Clinton. Those who truly knew Richard can attest to the fact that he had a huge heart. He grew as a man and frequently expressed his love for his wife and family. When you talked, he listened. Richard would give you the shirt off his back and was always there for anyone who needed something fixed or built. He was generous with his kids helping to put them all through college. Richard was the first to notice the first sprinkling of green during spring, the new buds on the trees, the daffodils, and the tulips. He would come home from work whistling up the driveway on his way to check his garden. Richard had a wonderful and at times, wicked sense of humor and entertained us up until he left this earth. Simple things are what made him happy. Richard never tried and never wanted to be somebody he wasn’t and lived his life his way. He will be missed and loved for eternity. We are proud of you. A graveside service will be held at Graceland Cemetery in Decatur at the fountain on Friday, June 10, 2022 at 1:00 pm with Roy Pritts officiating.

The family of Richard Byron Evey created this Life Tributes page to make it easy to share your memories.

Send flowers to the Evey family.