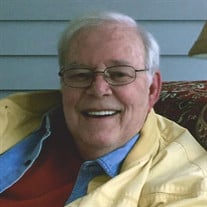 Robert “Bob” Lee Glenn, 81, passed away at St. Mary’s Hospital in Decatur, IL on June 11, 2022. Bob was born to Ada and Nathan Glenn on February 19, 1941 in Dahlgren, IL. Bob graduated from Dahlgren High School in 1958. He went on to earn a Liberal Arts Degree, then enlisted in the U.S. Marine Corps. Bob took immense pride in becoming a qualified aircraft carrier pilot after completion of the U.S. Navy training, flying the T-28 Trojan aircraft and landing it on the USS Lexington. This was the highlight of his career. On May 29, 1982, Bob married Mary Lou Boland in Decatur, IL. He worked at the Illinois Department of Insurance outreach program for 20 years. He worked as a radio host throughout the state answering questions from the public about insurance. He loved both watching and playing sports. He was a diehard Illini and Cardinals fan. Bob is survived by his wife, Mary Lou Glenn; children, Carrie (Brent) Moe of Twin Falls, ID, Wayne (Susan) Glenn of Wichita, KS, Scott Boland of Milwaukee, WI, Kim (Xochitl) Chafino of Austin, TX, 11 grandchildren, 15 great grandchildren, and a special cousin, Karen Guin of Chicago, IL. Bob is preceded in death by his parents; son, Jay Glenn; great grandchild, Skyla Schindler. A visitation will be held on Thursday, June 16, 2022 from 4:00 to 5:00 PM with services immediately following at Graceland Fairlawn Funeral Home. The family has requested that people wear masks for visitation and services. Please wear your Illini attire. Memorials to American Heart Association, American Lung Association, or donor’s choice. Condolences may be sent to Bob’s family at www.gracelandfairlawn.com

The family of Robert "Bob" Lee Glenn created this Life Tributes page to make it easy to share your memories.

Send flowers to the Glenn family.