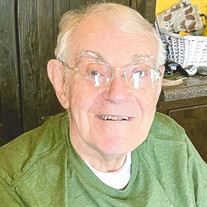 Robert “Bob” Lee Cox 1/4/1929-5/16/2022 It is with great sadness we announce the passing of Robert Lee Cox; born and raised in Indiana, the second son of The Reverend James and Opal Cox. He is survived by his brother James (Tina) Cox and sister Virginia (Jerry) McCoy. Robert was married for almost 66 years to the love of his life, Lutricia "Tish" Mae. Robert is also survived by four daughters: Patricia Lynne (Oscar) Valdez, Janet Lee (Kevin) Boebert, Nannette Rene (Jerry) White and the amazing Wendy Sue West. Combined they have ten grand-children and 21 great grandchildren with four great-great grandchildren. Robert was a man who loved to learn and to share his knowledge. His siblings spoke of him reading the encyclopedias as a teenager and he continued reading for the rest of his life. He loved to play chess and bridge, even substituting in one of Tish’s bridge clubs. Bob and Tish enjoyed bowling in leagues together for many years, they were a family that played together and sang together. Bob had a beautiful bass voice, and sang in the Church choir and in a men’s barber shop group, and always around campfires. Bob served in the U.S. Navy during the Korean War. After the war, he attended DePauw University majoring in Chemistry and minoring in Philosophy. Bob enjoyed sharing his love of the outdoors with his family. They tent camped together, and he also belonged to a hiking & backpacking club. Bob and Tish started their marriage in Illinois, then moved to New Jersey for work. Again, through Bob’s work, he was transferred to Arizona and finished his career in Illinois. A service and celebration of life for Robert will be held at the Clinton United Methodist Church 308 E. Main St. Clinton, IL 61727 on June 17th, at 11:00am. The family asks that you consider donating to OSF Hospice Care or the Vespasian Warner Public Library in lieu of flowers. Condolences may be sent to Bob's Family at www.gracelandfairlawn.com

The family of Robert Lee Cox created this Life Tributes page to make it easy to share your memories.

It is with great sadness...

Send flowers to the Cox family.