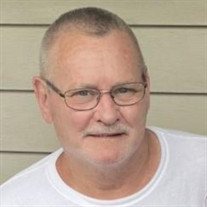 Robert “Bob” Rand Crawford, 69, of Decatur, IL, passed away Saturday, June 19, 2021. Bob was born August 2, 1951 the son of Stanley and Doris Foster Crawford. Bob was an avid family man who love basketball and gardening. One of his greatest joys was spending time with his family and friends. But the greatest loves of his life was his grandkids. He read his Bible daily and lived in the words that were written within it. The words that best describes him are that he was a man of love and laughter. Bob is survived by his wife, Debbie; son, Derek (Laura) Crawford; daughters, Amy Dempsey and Ashley (Jeff) Rhodes; sisters, Barbara Brooks, Bev Grossman, Pat (Lee) Boyd, Sandy Wallace and Cheryl (Bob) Gristy; grandchildren, Justin, Blane, Riley, Adryanna, Jake and Shelby (DJ); great-grandchildren, Madelyn, Kameryn and Ayden; son-in-law, Shawn Dempsey and his beloved dogs, Baby Boy and Gracie as well as numerous extended family and friends. Bob was preceded in death by his parents. Visitation for Bob will be held Wednesday, June 23, 2021 from 5-7 pm at Graceland Fairlawn Funeral Home. Funeral Services will also be held at Graceland Fairlawn Funeral Home 2091 Oakland Ave Decatur, Il 62526 on June 24, 2021 at 11am. Burial will follow at Boiling Springs Cemetery in Decatur, Il The family would also like to extend a special thanks to "the best doctor ever", Dr DaMarla. Arrangements by Graceland Fairlawn Funeral Home 2091 Oakland Ave., Decatur, IL 62526. Condolences and memories may be shared at www.gracelandfairlawn.com

The family of Robert "Bob" Crawford created this Life Tributes page to make it easy to share your memories.

Send flowers to the Crawford family.