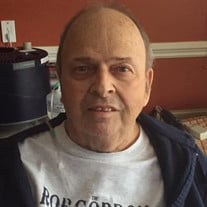 Robert E. “Bob” “Sonny” Gordon, 77 of Decatur, IL passed away on Wednesday, May 12, 2021 at Fair Havens Senior Living in Decatur. Bob was born on February 21, 1944 in East St. Louis, IL the son of Earl Franklin and Ada Pearl (Taylor) Gordon. Bob married Barbara Helen Cassidy on November 3, 1965 in Decatur. Barbara, his loving wife of 55 years, survives. Bob is also survived by his daughter Barbara “Bobbie Jo” Purdeu; 7 grandchildren: Brandy Stiles, Katelin Gordon, Cassidy (Rick Nutter) Gordon, Danielle (Edmund) Turudic, Dewie Gordon, Jordan Purdeu, Jenna Purdeu; great-grandchildren; brother: Fred (Toni) Gordon; sister: Pat Johnson. Bob was preceded in death by his parents, 1 son: Robert E. Gordon, II; and sister: Ruth Ann Young. Bob was a US Navy veteran, serving from 1958-1964. He began his working career with the Wabash Railroad, and later with Norfolk and Southern. He retired after 32 years of service with the railroad. Bob enjoyed family, friends, camping, traveling, and being the life of the party. Although he only had 2 natural children, Rob and Bobbie Jo, he was a father to many. He would give the shirt off his back to help others. He had a certain charm that was inviting and he never met a stranger. Services to celebrate Bob’s life will be on Sunday at 12:00 PM at Graceland/Fairlawn Funeral Home, Decatur. Visitation will be held from 10:00 am until the services on Sunday at the funeral home. Bob will be laid to rest at Graceland Cemetery with military honors. Graceland/Fairlawn Funeral Home, Decatur, IL is in charge of arrangements. Please share memories and condolences at www.gracelandfairlawn.com Funeral service will be streamed at www.funeralvue.com/login/event#54120.

The family of Robert E. "Bob" "Sonny" Gordon created this Life Tributes page to make it easy to share your memories.

Send flowers to the Gordon family.