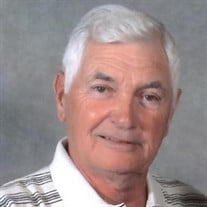 Robert Eugene Weaver, Sr., 85, of Oakley, Illinois, passed away Thursday, June 21, 2022, at his home, surrounded by his family. Robert was born November 26, 1936, at home in Taylorville, Illinois, to Clifford and Lucille (Robinson) Weaver. He served three years in the US Army, 11th Airborne Division. He married Helen “Joanne” McIntosh on February 6, 1960. They were happily married for 56 years. He retired from Mueller Company in 1999 after 42 years as a tool & die maker. He farmed part-time for many years. He enjoyed traveling in his motorhome with his wife and playing shuffleboard in Weslaco, Texas as snowbirds. He is survived by his five children: Kimberly (Richard) McDermith of Hartshorn, MO, Donna (Ron) Wampler of Surprise, AZ, Robert (Deborah) Weaver, Jr of Oakley, IL, Carole (James) Halvachs of Midland City, AL, and Ryan (Bridgette) Weaver of Decatur, IL; 20 grandchildren; 24 great-grandchildren; one brother; and eight sisters. He was preceded in death by his wife, parents, four brothers, and two sisters. The family would like to give special thanks to Jenna Stowers, APRN and staff, Dr. B. Esparaz, and Memorial Home Hospice, and special thanks to Helping Hands – Jessica (CL). Honoring Roberts wishes, cremation services will be provided by Graceland/Fairlawn Cremator. No services are planned at this time.

The family of Robert Eugene Weaver Sr. created this Life Tributes page to make it easy to share your memories.

Send flowers to the Weaver family.