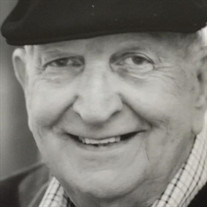 Rodney B. Washburn, 87, a former land acquisition specialist who devoted his life to causes of environmental conservation and social justice, passed away on October 30, 2021 at home in Decatur, IL surrounded by his loving family. He rejoins beloved wife Mary, who preceded him in death in 1993. Rod was born in Shelbyville, IL in 1934. After high school, he enlisted into an army reserve military police company in 1953, transferring to the United States Navy in 1955. Rod served at sea in the Pacific aboard an oceangoing salvage and rescue tug. He married the love of his life, Mary Delaney, in 1957. Their early marriage years together were spent in Pacific Beach, CA until their move back to Illinois. Rod and Mary raised two sons in San Diego and in Decatur, Illinois. He was a loving husband, father, father-in-law and grandfather to the end. Before his 1963 graduation with a degree in political science from San Diego State University, Rod was elected to Pi Sigma Alpha, the political science national honor society. He was thrilled that President John F. Kennedy was the inspiring commencement speaker at his June 1963 graduation from SDSU, speaking on social justice needs in education. Rod then embarked on a 32 year career in land acquisition and lifelong conservation. His first land acquisition role involved acquiring the right of way in southern California for the California Division of Highways and subsequently for Illinois Power Company. Inspired in 1968 by William Whyte’s new book Last Landscape, Rod became interested in protecting natural resources, an interest that would guide his life. While still working for Illinois Power Company, in 1969 he became Deputy Director for Lands for the Macon County Conservation District where he served with distinction until 1988. He broadened his interest in finding innovative ways to protect Macon County’s natural resources by co-founding in 1981 what later became the Macon County Conservation Foundation. Rodney rejoined Illinois Power in 1988 where he continued to work in land acquisition. After his retirement from Illinois Power Company in 1996, Rod was twice appointed to serve as Trustee of the Macon County Conservation District. In 2003 the Illinois Association of Conservation Districts presented him with the Burton H. Atwood award for conservation excellence. He served as a director of the Macon County Conservation Foundation until 2009 and was named its Director Emeritus in 2010. He supported social justice by serving a term on the board of the Decatur Area Habitat for Humanity and becoming a grant writer for the Elizabeth Ann Seton Program, a faith- based nonprofit nurturing Central Illinois pregnant and parenting women. He was a committed member of St. John’s Episcopal Church in Decatur, IL. His love of boating in his beloved Jolly Beggar sailboat and his time at sea led him to enjoy membership in the Commodore Decatur Yacht Club and the National Association of Fleet Tug Sailors. Rod was preceded in death by his wife Mary and by his mother, Agnes Washburn. He is survived by sons Stephen Washburn (Kathy) of Indianapolis, IN and Scott Washburn (Shawnette) of Mt. Zion, IL, by granddaughters Stephanie and Caroline of Indianapolis and Whitley of Mt. Zion and by grandsons Wescot and Wyles of Mt. Zion. There will be no visitation. A private memorial mass will be held at St. John’s Episcopal Church. Private interment services will be held in Glenwood Cemetery, Shelbyville, IL. Memorial contributions may be made to The Macon County Conservation Foundation at 3939 Nearing Lane, Decatur, IL 62522, to Riley Children’s Foundation at P.O. Box 3356, Indianapolis, IN, 46206-3356, or to Shriners Children’s Hospital- St. Louis via donate.lovetotherescue.org.

Rodney B. Washburn, 87, a former land acquisition specialist who devoted his life to causes of environmental conservation and social justice, passed away on October 30, 2021 at home in Decatur, IL surrounded by his loving family. He rejoins... View Obituary & Service Information

The family of Rodney B. Washburn created this Life Tributes page to make it easy to share your memories.

Send flowers to the Washburn family.