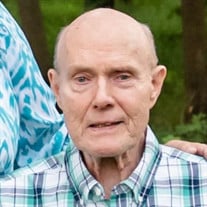 LOVINGTON- Ronald O. Nettles, 78, of Lovington, passed away at 3:40 am Monday, August 9, 2021, his beloved wife’s birthday, at St. Mary’s Hospital. Services to celebrate Ron’s life will be held at 11 am Saturday, August 21, 2021 at the Lovington United Methodist Church. Visitation will be held one hour prior to the services. Interment will follow in Keller Cemetery. Memorials are suggested to the Lovington Ambulance Service or to the Lovington United Methodist Church. Graceland/Fairlawn Funeral Home is assisting the family. Memories can be shared at www.gracelandfairlawn.com. Ron was born on June 13, 1943 in Centralia, IL a son of Orville J and Vera S. (Hoffman) Nettles. He retired from NCR after over 30 years. He later owned his own bank equipment repair business for many years. Ron proudly served his country in the Army. He married Roseanne Goble on October 26, 1962 in Charleston. She passed away at home on December 29, 2014. p He was a member of the Lovington United Methodist Church and enjoyed going fishing and having coffee at Casey’s. Ron also enjoyed mushroom hunting, woodworking, working on cars and tinkering in the garage. He was a devoted husband, father and a beloved grandfather who always put his family first. Surviving are her daughter- Deanna Nettles of Lovington and son Ryan Nettles (Randa) of Arthur, brother- Robert Nettles of Mazon, IL and a sister- Roxy McKinley of Mazon, IL, grandchildren- Derek Porter, Caleb Nettles, Kenli Nettles, Austin Becker, Connor Nettles, Kyla Carson and Hunter Carson. Ron was greeted in Heaven by his parents, wife, brother- Randy and brother-in-law- Larry McKinley.

The family of Ronald “Ron” Nettles created this Life Tributes page to make it easy to share your memories.

LOVINGTON- Ronald O. Nettles, 78, of Lovington, passed away at...

Send flowers to the Nettles family.