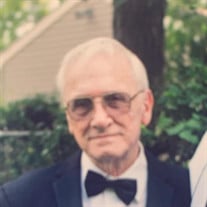 Ronald Woods, 79, of Decatur, IL passed away September 28, 2021 at his residence. Ronald was born December 14, 1941 in Jellico, TN, the son of Opal and Rose (Meader) Woods. He married Bonnie J. Thomas on July 13, 1985 in Decatur, IL. He was a Vietnam veteran of the Army, serving from February 1967 to February 1973. He was a employee of Caterpillar serving as a welder. He retired in May of 1997. He was survived by his wife, Bonnie; children, Matthew Woods, (Ashley) of Decatur, IL, Travis Woods, Troy Woods (Sherry of Blue Mound, IL, Mandy Dye (Derek) of Stonington, IL; sister, Sue Warren, (Dale) of Bullpit, IL; brother, Larry Woods (Ruth) of Kincaid, IL; six grandchildren and numerous nieces and nephews. He was preceded in death by, daughter, Trisha; brother, Robert; infant brother, Charles; infant sister, Doris and both parents. Per Ronalds wishes there will be no services. The Graceland Fairlawn Funeral Home has been entrusted with the care of Ronald. Condolences may be left to his family at www.gracelandfairlawn.com.

The family of Ronald Woods created this Life Tributes page to make it easy to share your memories.

Send flowers to the Woods family.