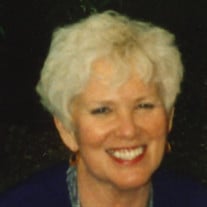 Roxeanna Jean Franklin, “Roxie” to all who knew her, passed away on Saturday, June 12, 2021, at Decatur Memorial Hospital. Roxie was born on April 29, 1938, in Pinckneyville, Illinois, the daughter of Harry and Dorothy (Hawkins) Emery. She married and raised five children, making loving homes first in Savannah, Georgia, then in Southern and Central Illinois. Roxie is survived by her husband Jerry, her five children, Stephen Harsy of Oro Valley, AZ, Sandra Dotson of Decatur, IL, Dale (Beth) Harsy of Citrus Heights, CA, Gary Harsy of Decatur, IL, and Douglas (Jaril) Harsy of Southlake, TX; six grandchildren, Christopher Harsy, Nicolas Harsy, Roxie Danyus, Blake Dotson, Mason Harsy, and Nolan Harsy; four great-grandchildren, Beau Danyus, Elija Danyus, Maci Dotson and Lyla Dotson; and Jerry’s children, grandchildren, and great-grandchildren. Roxie’s passion for learning never waned, and once the children were in school, she resumed her education, starting with her GED, and proceeding eventually to a master’s degree in nursing from the University of California, Davis. She became an educator, serving in various faculty positions over the course of her career, teaching and engaging in research. She also worked for many years as a nurse practitioner, providing care to patients from all walks of life. Roxie and Jerry Franklin met in Sacramento, California, married and spent 23 happy years together. After retirement, they moved to Decatur, where they enjoyed time spent with family and friends. Roxie had a talent for making beautiful homes, both inside and in the garden. Roxie’s family was her priority. She was always there, ready to listen compassionately, never judging, offering gentle advice, support, and love. She will be deeply missed. A service to celebrate Roxie’s life will be held at 1pm Thursday, June 17, at Graceland Fairlawn Funeral Home in Decatur, with a visitation from 11am to 1pm at the funeral home. Please share memories and condolences at www.gracelandfairlawn.com

Roxeanna Jean Franklin, &#8220;Roxie&#8221; to all who knew her, passed away on Saturday, June 12, 2021, at Decatur Memorial Hospital. Roxie was born on April 29, 1938, in Pinckneyville, Illinois, the daughter of Harry and Dorothy (Hawkins)... View Obituary & Service Information

The family of Roxeanna J. "Roxie" Franklin created this Life Tributes page to make it easy to share your memories.

Roxeanna Jean Franklin, “Roxie” to all who knew her, passed away...

Send flowers to the Franklin family.