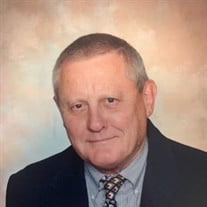 Wilbert (Bill) Emerson Horve passed away on Wednesday February 10, 2021 peacefully at home at the age of 84. Bill was born August 29, 1936 in Decatur IL. He graduated from Decatur High and joined the U.S. Army and trained as a machinist while serving in Germany. He met and married his wife Regina in 1958 before returning to the United States. Bill started his career as a draftsman before working as a machinist and worked up to being the General Forman of Maintenance at Mueller Company. Over the course of his career he worked at AE Staley, Decatur Foundry, Midland Machine Shop, Marvel Schebler, Springfield Housing Authority and Red Barton. Bill was active in Judo and attained a rank of 6th degree black belt. He and Regina owned and operated the Decatur Dojo from 1971 to 1980 and coached several players who competed at a national and international level. He was active in the United States Judo Association, held several positions and directed multiple national judo tournaments. His legacy in the sport lives on in the number of students that continue to teach judo today. He and Regina loved to travel and were able to enjoy many trips together before her death in 2014. Bill enjoyed many hobbies over the years including scuba diving, genealogy, researching Mueller Company and Decatur history, fishing, boating and he loved living on the lake. He volunteered for the Macon County color guard and DMH thrift shop after his retirement. He was always up for a good time and enjoyed drinking a beer or two with friends and family and will always be remembered for his smile and easy laughter. He is survived by his daughter Nicole Horve and partner Brenda Van Eman, granddaughter Andrea Horve and partner Sarah Campo, nephews Jimmy Horve, Mike Horve, Pat Horve, Paul Horve, Uwe Schaub and niece Heike Schaub Griffiths. He was preceded in death by his wife Regina Horve, son William (Bill) Horve, father Wilbert Horve, mother Ardith Horve and brother Edward (Cookie) Horve. Rest assured there is a grand poker game occurring in heaven and he will get to watch over his beloved Green Bay Packers. Funeral services will be held 11:00 AM Saturday February 20, 2021 at Graceland Fairlawn Funeral Home. Visitation will be from 9:30 AM – 11:00 AM Saturday, February 20, 2021 at the funeral home. Memorials: CEFCU/Wilbert Horve Judo Memorial Fund. Condolences may be left to Bill’s family at www.gracelandfairlawn.com. Service will be streamed at http://webcast.funeralrecording.com/events/viewer/47853/hash:E78BDD187CCD0957.

Wilbert (Bill) Emerson Horve passed away on Wednesday February 10, 2021 peacefully at home at the age of 84. Bill was born August 29, 1936 in Decatur IL. He graduated from Decatur High and joined the U.S. Army and trained as a machinist while... View Obituary & Service Information

The family of Wilbert "Bill" Emerson Horve created this Life Tributes page to make it easy to share your memories.

Send flowers to the Horve family.