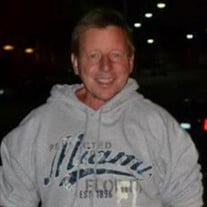 SAINT PETERSBURG, Florida — William Patrick (Pat) Bell, age 62, passed away on Monday, November 29, 2021, at Bayfront Hospital in St. Petersburg, FL. At the time of his death, he was surrounded by his family. Pat was born in Decatur, IL, in 1959, to Charles and Wilma (Mizeur) Bell. As a boy, Pat was a member of St. Patrick's Church in Decatur. He graduated from Lakeview High School, attended Richland Community College, and then received watch repair training in Quincy, IL. Pat moved to Florida about 40-years ago and lived in the St. Petersburg area most of that time. He worked briefly at a jewelry store doing watch repair, and then employed by Honeywell and General Electric for most of his adult life. Pat had a lifetime love of drag racing and baseball. He played Khoury League Baseball as a boy. While still living in Illinois, he often visited Motion Raceway in Assumption, IL, and would frequently race whatever car he owned at the time. He continued that hobby after moving to Florida and was currently restoring a 1968 Dodge at the time of his death. Being a Florida transplant, he was an avid Tampa Bay Bucs fan and Tampa Bay Rays fan. His "man cave" at his home was a tribute to his love of fast cars and baseball. Of most importance to Pat was his love of his wife Fernanda, his children, grandchildren and extended family. Pat's family and friends will always remember him for being a kind-hearted, generous man. He looked out for the well-being of his family and friends and took care of them in any way possible. During the last days of Pat's life, his family reminisced about the numerous thoughtful acts he did for his loved ones throughout his life and how he positively impacted so many people's lives. Pat is survived by his loving wife, Fernanda Bell; brother, Philip Bell; daughter, Anna (Rob); grandson, Sam; step-children: Luanna, Emanuela, Luisa, and Robert; step-grandchildren: Maria, Nicky, Joao, Manoel, Keith, Joshua, and Bryce. Preceding Pat in death were parents, Charles and Wilma Bell; brother, Timothy Bell; grandparents, William and Elizabeth Mizeur; grandparents, George and Betty Bell; and grandmother, Thelma Smith. A visitation will be held at St. Patrick's Church in Decatur, IL, on Saturday, June 4, 2022, from 9:00 AM to 9:45 AM. A Funeral Mass will be held afterwards at 10:00 AM. After the Mass, burial will then take place at Calvary Cemetery in Pana, IL. In lieu of flowers, contributions may be made to St. Patrick's School in Decatur, IL, or the charity of your choice. Graceland/Fairlawn Funeral Home and Cremation Center in Decatur is assisting with the arrangements.

SAINT PETERSBURG, Florida &#8212; William Patrick (Pat) Bell, age 62, passed away on Monday, November 29, 2021, at Bayfront Hospital in St. Petersburg, FL. At the time of his death, he was surrounded by his family. Pat was born in Decatur, IL,... View Obituary & Service Information

The family of William Patrick Bell created this Life Tributes page to make it easy to share your memories.

Send flowers to the Bell family.