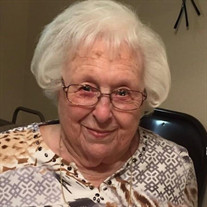 Wilma Jean Wilking, 94, of Decatur, IL passed away February 2, 2022 at Hickory Point Christian Village. Jean was born March 3, 1927 in Niantic, IL, the daughter of Herman and Clara Miller. She married Donald Wilking on September 25, 1947. He proceeded her in death. Jean was an accomplished homemaker. She was an outstanding seamstress. Jean always had someone that she took care of whether it be family member or friend. Jean has been living in Primrose Retirement Community for the last 11 years. There she made many friends and staff became family. She enjoyed bingo, cards, and putting jigsaw puzzles together with her friend, Penny. Surviving are her children, Greta Bell (Tim) of Winfield, IL, Sandra Bray (Jeff) of Decatur IL. Sister, Lois Robinson of Decatur, IL, brother Dan Miller (Marta) of Niantic, IL, sisters in law Susie Miller of Niantic, IL, and Marilyn Miller of Niantic, IL, Grandchildren, Laura Lange (Ian) of Estacada, OR, Erica (Frank) of Wheaton, IL, Rachael Yaroshevich (Vitalily) of Cincinnati, OH, and Jessica Skinner (Marcus) of MT Pleasant, PA. Great grandchildren: Conner Lange, Evan Lange, Zachary Lange and Jesslyn Skinner. She also had many loving nieces and nephews. She was preceeded in death by her parents, brothers: infant Gerald, George Miller, and Jake Miller, brother in law Jett Robinson, sister in law Lenna Haferland, nephews Earl Robinson and Tony Haferland, infant granddaughter Miranda Bray. The family would like to thank the staff at Hickory Point Christian Village for their expertise and kindness during a very difficult time. Services will be 11:00 AM Saturday, April 9, 2022 at Graceland Fairlawn Funeral Home. Visitation will be from 10:00 AM - 11:00 AM Saturday, April 9, 2022 at the funeral home. Wilma was been buried at Graceland Cemetery. Memorials: Michael J Fox Foundation for Parkinson's Research. The Graceland Fairlawn Funeral Home has been entrusted with the care of Jean. Condolences can be left to Jean's family at www.gracelandfairlawn.com. Services will be streamed at www.funeralvue.com/login/event#71578.

The family of Wilma Jean Wilking created this Life Tributes page to make it easy to share your memories.

Send flowers to the Wilking family.