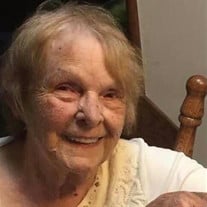 Thompson, Kathleen Once upon a time there was a fair maiden named Kate born to Ezra and Lucille Revis in a land called Boody, IL on February 3, 1939. Kate grew up with her 3 brothers Mike, Jim, and Phil and 1 sister Lily. She was raised to be strong and free like beautiful wildflowers are meant to be raised. As the years passed, Kate grew into a sassy young lady full of charm and wit. One day, our heroine was set up on a blind date at an ice cream shop in Blue Mound, IL and met the prince that would become her husband. On February 3, 1957, Kate wed Jesse Thompson and started a lifelong journey full of many happily ever afters. As time passed, the 2 settled in Harristown, IL where Kate became a creator of one of the most magical aeronautical crafts ever created at a factory: the kite. Because their love was so sound, Jesse and Kate were blessed with 6 enchanting children, Jerry, Terri, Candy, Babs, Sherri, and Joe and the family continued to grow over the years to become one of the most fantastical families to have ever graced the kingdom. Kate was known far and wide for her laughter, imagination, and cleverness. She loved being with her family, her puppies, and an occasional romance novel (or 2). She often convinced her grandchildren she had magical powers, and many still believe this to this day. Kate also was an exceptional card player, although being the saint that she was, she tended to allow the less fortunate ones to win (Courtney). On January 6, 2022, Kate’s happily ever after continued into Heaven where she was met by her prince once more with open arms. The embrace was so joyous that it is said it can still be felt as far away as Earth by the ones who loved them most. Kate will be missed terribly, but her legend will live on and her story will be passed down through her children, grandchildren, and great grandchildren for years to come. Kate is survived by her brother Mike (Linda) Revis, her children Jerry (Tabby) Thompson, Terri Thompson, Candy (Bob) Cook, Babs (Chris) Moser, Sherri (Brett) Jackson, and Joe (Linda) Thompson. Also surviving are her grandchildren Josh Thompson, Kerri (Phillip) Kahn, Krystal (Ray) Pumphrey, David (Brittany) Cook, Stephanie (Bryce) Ellis, Casey (Andrew) Wegener, Andy (Angie Boes) Jackson, Tyler (Kassy) Jackson, Jimmy (Destiney Lynch) Jackson, Megan (Chad Leffler) Blair, and Courtney (Blake) Lowe, and numerous great grandchildren. She was preceded in death by her husband Jesse Thompson, her parents Ezra and Lucille, her siblings Jim Revis, Phil Revis, and Lily Koprek, and her great grandson Kannen Leffler.

Thompson, Kathleen Once upon a time there was a fair maiden named Kate born to Ezra and Lucille Revis in a land called Boody, IL on February 3, 1939. Kate grew up with her 3 brothers Mike, Jim, and Phil and 1 sister Lily. She was raised to be... View Obituary & Service Information

The family of Kathleen Thompson created this Life Tributes page to make it easy to share your memories.

Thompson, Kathleen
Once upon a time there was a fair maiden named...

Send flowers to the Thompson family.