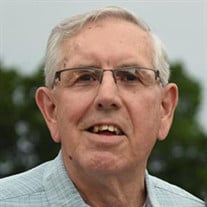 Larry Homer Hendricker, age 83, husband of Janet C. Hendricker for 57 years, died Tuesday, June 14th, at his new home in Hickory, NC, surrounded by his family. Larry was born November 15, 1938, in Beardstown, IL, the eldest son of the late Homer K. and Louise Goodwin Hendricker. Larry graduated from Beardstown High School in 1956 and went on to receive a Bachelor of Science in Business Administration from Olivet Nazarene University in 1961. Larry and Jan were then married on June 19, 1965 in Pana, IL and settled in Decatur, IL. Larry was a tireless worker, initially starting as an accountant for W.R. Grace, later transitioning to Firestone Tire & Rubber in that same role, where he worked for 10 years. He then continued his career as a mill worker for Archer Daniels Midland, retiring in 2004, missing 1 day of work through 23 years of service. Larry loved red tractors, his garden, and St. Louis Cardinals baseball, but he supremely loved Christ and His church. He was a member of West Side Church of the Nazarene for almost 50 years, and later in life transitioned his membership to Parkway Church of the Nazarene, both in Decatur, IL. After moving to Peoria, IL in 2014, he became of member of Grace Presbyterian Church. He made his final move to Hickory, NC, in January of 2021 and became a member of Grace Covenant Presbyterian Church soon thereafter. During his lifetime he sacrificially and lovingly devoted himself to his wife, sons, and grandchildren. Surviving are his wife, Janet C. Kay of Hickory, NC; his three sons, Jeffrey of Clinton, IL, Gregory (Chele) of Bend, OR, and Dr. Ryan (Julie) of Hickory, NC; eight grandchildren, Jessa of Bloomington, IL, Jordan of Chicago, IL, Kendall, Seth, and Elliot of Bend, OR, Matthew, Bradley, and Anna of Hickory, NC; three sisters, Betty Combest of Rantoul, IL, Mrs. Byron (Rosalind White) of Marquand, MO, and Mrs. Brian (Sherry) Ralston of Rushville, IL; one sister-in law, Dorothy Hendricker of Beardstown, IL; and several nieces and nephews. He was preceded in death by his parents, two siblings, Mike Hendricker and Marsha Owens, and one daughter-in-law, Judy Hendricker. Visitation will be held June 24, 2022 from 9 to 11 AM at West Side Church of the Nazarene, Decatur, IL. A funeral service will be held at 11 AM, June 24, also at West Side Church of the Nazarene with Rev. Mike Tapscott officiating. Memorials may be made to West Side Church of the Nazarene 788 N. Sunnyside Rd., Decatur IL, Olivet Nazarene University or the charity of one’s choice in his memory. The family wishes to thank Dawn Gardner, Larry’s Hospice nurse for such loving and tender care to him and to his family. Larry died as he lived – as a testimony to his union with Christ and the Holy Spirit – profoundly loving, joyful, peaceful, patient, kind, good, faithful, gentle, and self-controlled. His faith is now sight. Hallelujah!

The family of Larry Homer Hendricker created this Life Tributes page to make it easy to share your memories.

Send flowers to the Hendricker family.