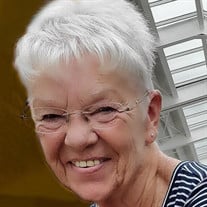 Patricia Ann Shadwell, 74, of Decatur, passed away Tuesday, August 24, 2021 at HSHS St. Mary’s Hospital with her daughters at her side. Pat was born in Effingham, IL on May 17, 1947, the daughter of Clarence “Bud” and Mildred (Goldstein) Braun. After high school she earned certification as an administrative secretary. She utilized those skills as a 35-year employee of the Decatur Public School District. During that time, she was instrumental in organizing and serving on the executive board of the DESPA/IEA. In her free time, she enjoyed golfing, reading, shopping with the girls, camping, being on the lake with her husband, traveling, and spending time with her beloved grandchildren. She married Kenneth Shadwell on August 6, 1966. They enjoyed 51 years together prior to his death in 2017. Pat is survived by her daughters Melissa “Missy” (Brian) Koning of Lincoln and Deborah “Debbie” (Scott) Tague of Decatur; sister Karen (Rick) Henkelman of Effingham; sister-in-law Carol Braun; mother-in-law Ruth Shadwell; brother-in-law Richard (Connie) Shadwell; grandchildren Matthew (Graysie Cook) Tague, Michael (Courtney) Tague, Luke (Rachel Lockenour) Koning, and Max (Alexis Beard) Koning; great-grandchildren Myla and Maylee; and many beloved nieces, nephews, and cousins in her large extended family. Pat was preceded in death by her parents, spouse, and brother Frank Braun. Cremation services are being provided by Graceland/Fairlawn Funeral Home. A memorial service to celebrate Pat’s life will be held at 5:30pm on Friday, September 3 at Graceland/Fairlawn Funeral Home. Visitation will be prior to the service, beginning at 4:00pm at the funeral home. Memorials may be directed to the American Cancer Society. Condolences may be left for the family at www.gracelandfairlawn.com.

The family of Patricia Ann Shadwell created this Life Tributes page to make it easy to share your memories.

Send flowers to the Shadwell family.