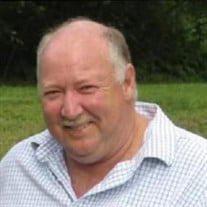 On Friday, March 19, 2021, at 11:17 p.m., Terry Lee McWilliams “Magoo,” loving husband, dad, grandpa, and great-grandpa passed away at age 61 from Covid pneumonia. Terry was born August 12, 1959 in Decatur, Illinois, son of Kenneth and Patricia (Rapp) McWilliams. Terry met the love of his life Shawn Allen in 1974 and married in 1978. Together they had 2 children and spent 46 wonderful years together. He retired in 2019 from Archer Daniels Midland Company – West Plant after 42 years. He also enjoyed many side jobs over the years, including owning Mega Carpet Cleaning for 7 years and driving a semi for Durbin Trucking. He was a dedicated, hardworking man who would remind his family often that “He doesn’t play around.” He spent many years doing auto body and paint work in his polebarn. Terry was an avid crappie fisherman who spent many years with his two best friends Dave and Gary Kupiec doing what they loved. Terry loved watching his grandchildren play in their many sports and Go-Kart racing. He was always so proud of them and couldn’t wait to get some snacks and cheer them on. Terry never met a stranger, making friends everywhere he went and sometimes bringing them home. He could always be found trying to feed someone, make them a margarita, or dish out a playful insult. Terry is survived by his wife Shawn; beloved dog Jeffrey; son Joel McWilliams (Jennifer); daughter Ashley McWilliams (Don); grandchildren Katlin (Cameron), Dylan, Nicole, Chloé, Dezi, Malyah, Aidan, Camron, Cabela, Megan (Colby), and Chelsie (Josh); great-grandchildren Parker, Knox, Emmersyn, Cruz, Coleman, Poppy, and Z; sisters Tracy Riggs (Gary), Teresa Hale (Jeff), and Tina McWilliams; brothers-in-law Troy Allen (Kim) and Tony Milligan (Edie); sister-in-law Penny Stonecipher (Scott); nephews Danel, Timmy, Jay, and Kenneth; nieces Kari, Sammi, and Olivia; and many great friends. Terry was preceded in death by his parents, brother Tim McWilliams, sister-in-law Carolyn McWilliams, father-in-law Jim Allen brother-in-law Jeff Allen, and nephew Zack Emert. A special thank-you to Dr. Minnaganti and colleagues, Dr. Arnold and colleagues, and ICU nursing staff. We will always remember your long, tiring, and heartfelt care that you provided Terry, even when he refused his red safety socks. All donations should be made to the family of Terry McWilliams for final expenses or Macon County Animal Control. Funeral service for Terry will be held at 3:00 pm on Saturday, March 27 at Graceland Fairlawn Funeral Home. Visitation will precede the service from 1:00 pm to 3:00 pm. A gathering will immediately follow services at the DAV at 1700 N Lakeshore Dr. Condolences may be left to Terry’s family at www.gracelandfairlawn.com. Service will be streamed at www.funeralvue.com/login/event#50804.

The family of Terry Lee McWilliams created this Life Tributes page to make it easy to share your memories.

Send flowers to the McWilliams family.